An unbelievably exciting experience the one I had at the Wired Next Fest #wnf2014 with more than 150 “brand-new-designers” in an unrecognizable version of a HALL of the old Natural Science Museum of Milan.
The museum is a familiar place for me: I visit it with my kids at least once a month.
It will never be the same again…
Watch this amazing video filmed by Milo to get the idea:

As anticipated, only a restricted number of people should have taken part in the event – around 50 – but in the end about 150 attended and many others unfortunately were turned away…
I have been told that it was one of the most successful events of the first day!
By chance I had brought with me 60 more Canvases in A1 format and the Wired people were so clever to print 100 more Canvases in A3 in less than 30 minutes!
I really have to thank Emiliano Audisio, the Project Manager of PianoB (“Plan B” in Italian, a great name for an event management company, isn’t it?).
And I also thank the brilliant guys from Wired  – Andrea Girolami, who introduced me and Milo and managed to motivate the participants, and Maurizio Pesce, who made the extra prints happen and supported the set-up. My thanks also to Claudia Suardi, Event Manager of Condenast, who made everything work with a smile. Finally my brilliant IULM students Gio Russo and Maddalena Vigliotti that made everything easy.

Milo Sciaky was amazing: in 5 minutes he was able to set up a professional photographic set and after being briefed by the participants using their own Canvas, he managed to take dozens of profile photos in less than half an hour: 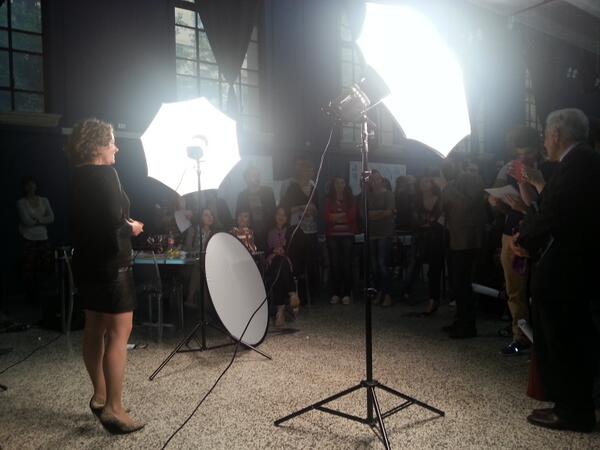 Only later, at the end of the event, I realised how crazy I had been, having so many people in a relatively small room going through my slides and even 2 difficult exercises…!
Anyway, all the people who took part in the event were so good and cooperative. Thank you so much!

Everything went perfectly and at the end I felt so touched:
I can’t believe that it all started with just a “simple” PDF file…