Enel, a Fortune # 84 company, serves around 64 million users in more than 29 countries and boasts the largest customer base of all energy producers in Europe with a net installed capacity of 83 GW and a network of nearly 2.1 million kilometers.

Also in 2015, Enel began to plan a new growth-oriented strategy called Open Power. The aim of this strategy is to position Enel as an innovative and sustainable group that works to spread and expand the technological content of its activities aiming to improve its services globally and to guarantee energy security.

Isabella Panizza, Enel’s Head of Global Digital Communications, found herself with a really challenging task: that of creating Enel’s new global digital communications team in just a few months. She also had to develop brand positioning across 30 countries on the digital media and other channels launched to support Enel’s new Open Power strategy!
An even more challenging task when one learns that Isabella was a relative newcomer to Enel. She had to create a team from virtually zero while at the same time defining a new digital strategy and initiating the process of re-branding all of the businesses’s digital assets.

Isabella turned to BigName to help her face this challenge and the completed project ended up in Tim Clark and Bruce Hazen’s Business Model Team book (you can read the extract here) which is to be curated by ourselves and then published by Hoepli in Italian at the beginning of 2018. The announcement of the publication was the subject of an Enel + BigName joint presentation during Rome’s Social Media Week.

It is with great pleasure that we present a summary of the Enel case featured in Tim and Bruce’s book. 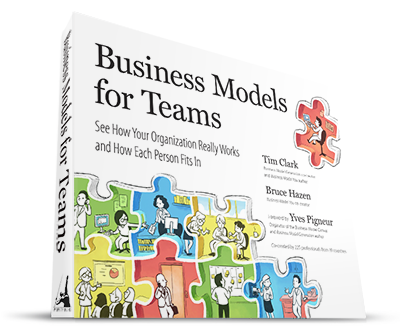 WHAT TO DO FIRST: STRATEGY OR TEAM?

An as yet not well defined problem that is fortunately suited to the agile approach of Design Thinking and to the key assumptions that govern our work on the innovation of teams and people:

The challenge is to define these models so they are aligned and it can be very useful to represent logic lying behind them visually using the Team Business Model Canvas: 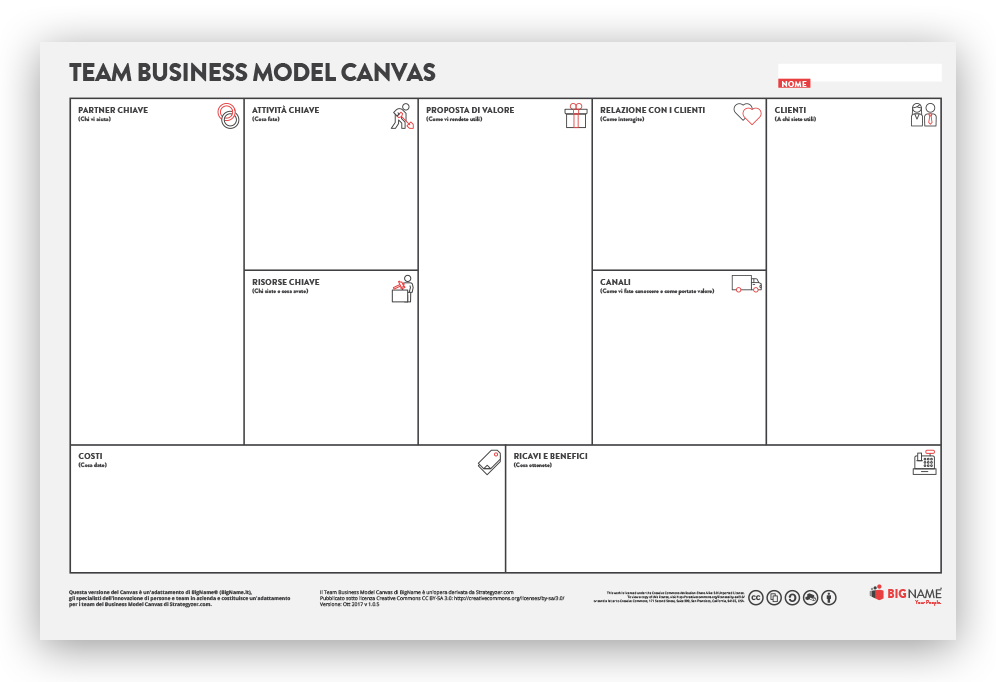 Along with the digital strategy development partner, the US agency, HUGE, via a workshop, we gathered together all internal customers, constituted by business unit representatives and digital team leaders from around the world: the participants were asked to draw their own personal business models, including their activities, and to explain their tasks, problems and goals. This empathic approach, based on real users of team services, allowed us to clarify the bases for drawing up clear digital strategy and the new Team Value Proposals thus enabling the design of the Team Business Model shown below: 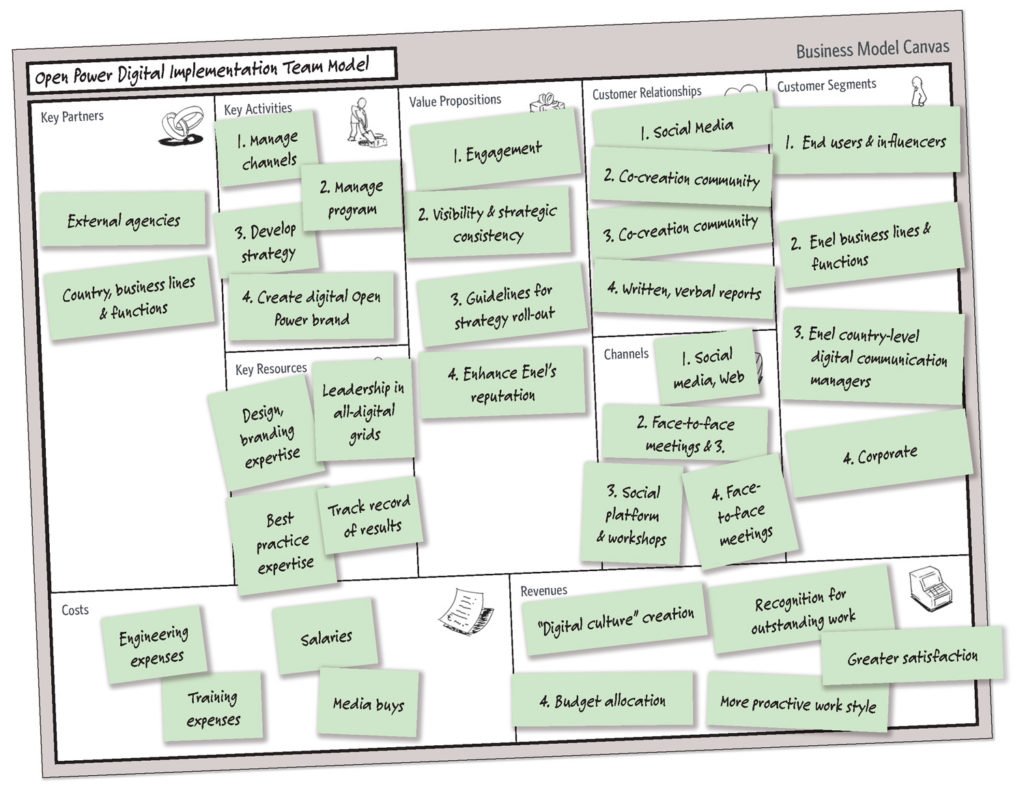 Only afterwards did the time come to move on to organigrams and people.
Indeed, while organigrams describe hierarchical relationships within the company and reveal where skills are deployed, they say little about how an organization functions as a system. 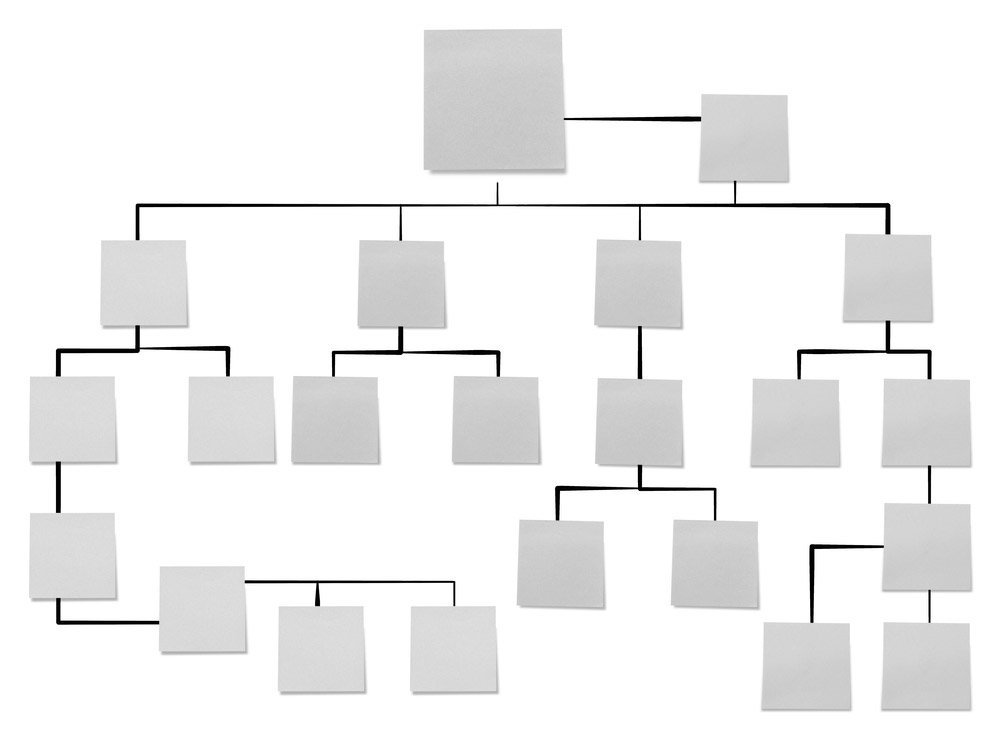 The business model, on the other hand, describes what an organization does, for whom and how its elements are related: it shows how a system “happens all at once”.
Roles and processes were defined successively so as to identify the requirements of the recruiting campaign and to facilitate the inclusion of new people within the new digital team.

Finally, participants used Branding Canvas (a tool created by BigName) to define behaviors that will help them become Open Power Ambassadors both inside and outside Enel.

Isabella says that she derives great satisfaction from seeing internal stakeholders – her clients – understanding her new team’s role as a Key Partner!

Working with this methodology, with the visual tools, and the common language that enabled it, was a powerful accelerator for the whole process.

Open Power was successfully launched in 2016 and is now the new face of the Italian colossus.